For many patients, the idea of recovering from surgery is almost more daunting than the prospect of undergoing surgery itself. Understandably so. Recovering from surgery has traditionally been a lengthy and painful process, weighed down by the necessity of narcotic painkillers, the chance of infection, and the burden of added health care costs.

But now, according to this Wall Street Journal article, surgical teams across the United States are making great strides in what’s being called enhanced recovery, which is a protocol designed to make surgical recovery quicker and easier with a lower chance of infection and other complications. Because this protocol is designed to cut down on bed rest and other post-surgical care, it can also reduce health care expenses.

According to a study in February’s Journal of the American College of Surgeons, enhanced recovery was found to cut post-surgical hospital stays by 2.2 days, reduce complications by 17%, increase pain control satisfaction amongst patients by 55%, and save patients an average of $7,129.

With the enhanced recovery protocol, patients are still asked to not eat for a number of hours prior to a surgical procedure, but in order to combat post-surgical nausea and weakness, patients are given a carbohydrate-heavy beverage full of vitamins, minerals, and electrolytes several hours prior to surgery.

Instead of relying on narcotic painkillers post-surgically, patients are pretreated for pain using nonnarcotic painkillers as well as epidurals, which are kept in place after surgery. And instead of loading up patients with IV fluids during surgery, the fluid level will be carefully monitored so patients receive only necessary fluids in order to avoid the side effects of fluid retention. With this protocol, patients are out of bed and moving around shortly after surgery, as well as ingesting solid foods – two major contributing factors to a quicker recovery.

Though enhanced recovery is relatively new to the U.S., it’s been in use in Europe for 15 years. The strongest evidence of enhanced recovery’s success has been in colorectal surgery, but it is also beginning to be used in surgeries for breast, liver, pancreas and bladder cancers, as well as joint replacement procedures and hip fracture treatment. 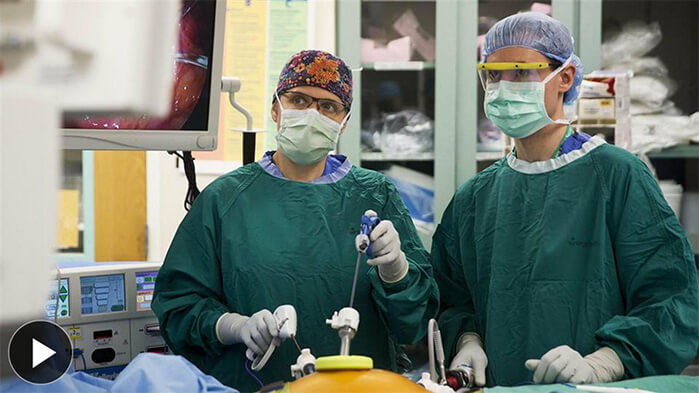